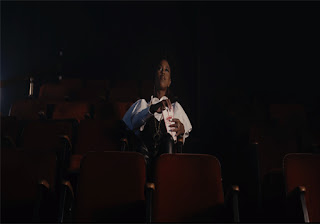 Thanks to a worldwide pandemic, the true moviegoing experience is now a thing of the past. But today (1/5/2021), rapper/singer, multi-hyphenate Lyric Jones transposes that experience into our current reality in the John Benneche-directed music video for "Rock On". The hard-hitting, Nottz-produced song is from Jones's latest album Closer Than They Appear, which released to critical acclaim in October of last year and made some notable year-end lists.

Executive produced by Phonte (of the legendary rap group Little Brother and Grammy-nominated soul outfit The Foreign Exchange), Closer Than They Appear features Vic Mensa, Little Brother, and production from Nottz, among others. It's available now on all digital streaming platforms via Bars Only Entertainment/EMPIRE.

Stream/purchase Closer Than They Appear here.

MORE ABOUT LYRIC JONES:Boston, Massachusetts native Lyric Jones is a gifted rapper, drummer, singer/songwriter, producer, and occasional DJ. With about a decade-long career already under her belt, Lyric has collaborated and toured with her mentor Rah Digga, and shared stages with Pete Rock, Big Daddy Kane, Dilated Peoples, Robert Glasper, Avery Sunshine, among others. Blending jazz, soul and hip-hop with her arresting vocal ability as a singer, and razor sharp bars and cadence as an emcee, Lyric's immense talent has earned her enthusiastic co-signs from the likes of DJ Premier, Chuck D, Black Thought, Pharoahe Monch, J-Live, and more. Her influences range from Jill Scott, Ledisi, and Georgia Anne Muldrow to Nas and Black Thought.In her high school years, Lyric was joint enrolled at the Berklee College of Music in Boston where she was known as everyone's “lil sis", and honed natural ability as a performer, drummer and an emcee. In 2012, Lyric brought her talent to Los Angeles and released her debut album Jones St, which features collaborations with the late Phife Dawg (of A Tribe Called Quest) and Esperanza Spalding. Lyric now teaches 'Rap Techniques' at Hollywood’s Musicians Institute. She finds joy in paying it forward to the next generation.Lyric's dedication and pure love for hip-hop led her to produce and curate many showcases and events nationwide. Her forthcoming album Closer Than They Appear is executive produced by Phonte and due out before the close of 2020.