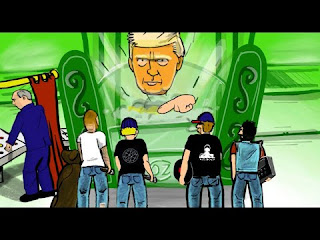 Magick Show is a rap duo out of Sudbury, ON, combining the distinct styles of working class poet Mickey O’Brien and lyrical/sonic explorer Max Moon. Their debut, Dark Night of the Soul, released in October, is an abrasive departure from their solo projects. “OZ”, the final track, takes a step outside of the horror-mystic aesthetic to focus more on the true horrors in the world.
With guest Moka Only on the hook, the duo fast-forward through the years to imagine a post-apocalyptic scene where might is right, scarcity is common, and the marginalized are constantly on the brink of survival. The release of “OZ” marks the duo’s wildest and most timely release yet to celebrate the departure of Donald Trump as U.S. president.
The “OZ” video, created by Baked Clown Animation, is a bad yet thoroughly entertaining acid trip through the worst and most ridiculous elements of 2020, better known as The Worst Year Ever. ”OZ” is produced by Juno-nominated producer and Sound Battle Royale champion Fresh Kils, with scratching by turntable renegade DJ Slam!.
Social Media:
FB - @magickshowraps
IG - @magickshowraps