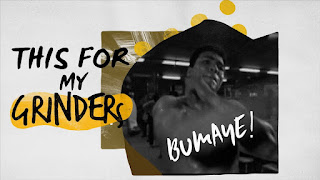 PS The ReBels celebrate the 'hustlers and grinders" on the driving, percussion-driven “Bumaye”. The song and its stunning visual video salutes survivors of oppression and celebrates people who hustle and grind to level up. It's the ultimate battle cry for 2021 coming on the heels of a year full of challenges for all of us, presented by two brothers from Kenya who landed in Texas as children seeking political Asylum and eventually became U.S. Citizens. In a bid to conquer the coming year, Pihon and SamuiLL tell us "Whatever you do, go kill 'em!" When they say it, you believe it.
With lyrical references to 1974's global phenomenon "Rumble In the Jungle", the legendary boxing match-up between Muhammad Ali and George Foreman, PS the ReBels honor the Congo, their father's native land. Appropriately, the single release fell on the eve of a contemporary boxing battle between legends Mike Tyson and Roy Jones, Jr. "Bumaye" is available now on all streaming services.

Produced with their long-time collaborator Producer MouseQuake (Nas, Lil' Wayne, Scarface, Zaytoven, Rakim, Pimp C), "Bumaye" was conceived around '13 shortly after the brother's first introduction to the stalwart renaissance writer/producer. Yet, it took half a decade to fine tune an inspirational message of fire and bombast. PS the ReBels are joined on the track by Congolese-American artist Kajad.

"The song has three languages referenced. English, Kiswahili and Lingala. It's based on the phrase made famous during the Ali vs. Foreman fight back in '74 at "Rumble in the Jungle" in then Zaire. "Ali bumaye!" which is part of a war chant of survival. Bumaye means "kill 'em" in the language of Lingala, an indigenous language spoken in the Congo. We also being both Congolese (aka Zairian) and Kenyan, we wanted to include the two languages." - PS the ReBels