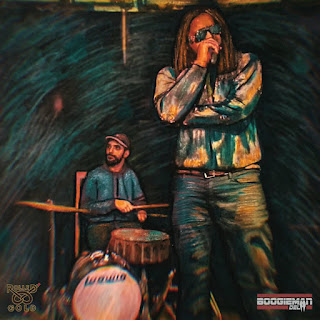 “Back in 2017, Boogie & I made the 2nd installment of his “Broken Watch” series, a 4-part collection of EP’s, each produced by a different producer. The 5-song EP we came up with a few months later, subtitled “Future Currents,” was so good, both production-wise & vocally, I naturally began to re-imagine some of the songs in a different context, production-wise. So after experimenting with one or two remixes I decided to make a whole tape, somewhat inspired by Madlib & Knxwledge remixing albums they also originally produced, and also as a challenge to see if I could even do the originals justice.” - Rolled Gold

Bio: Rolled Gold is a hip hop & RnB producer from Philadelphia, PA, who has a versatile, life-long musical resume ranging from jazz to punk rock bands, trap beats to neo-soul groups, and more. His style has heavy influence from hip-hop producers such as Madlib, J Dilla & Doom, the classic soul catalogues of Motown, Stax & Philly International, and jazz pioneers such as Duke Ellington, Charles Mingus & Sun Ra. While he had been sampling for most of his production career so far, his past four years have been spent writing and recording original compositions, with some help from friends and family, to use as sample material.