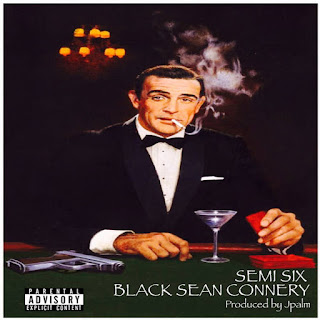 Semi is warming up 2021 with his new single Black Sean Connery, prod. by Jpalm. A luxurious track filled with horns, a soulful vocal sample and fly rhymes that would be heard playing while James Bond gets accompanied by ladies to play poker with while his gun and martini sit on the poker table in a Las Vegas casino.

Semi Six is an MC from Detroit’s west side, a city overflowing in music and art, though this is not where his journey as a rapper would begin. From 2012 to 2104, he lived abroad in Malaysia and worked closely with artists there such as Sony artist Sona One, opened up for DJ Whoo Kid and was one third of the rap group The BlackSmiths.

Returning back to his hometown in 2014, with a bravado style tone and lyrical wit, he and his high school friend Nolan The Ninja would do shows at venues in Detroit,  sit in each other's studio sessions and go digging for records often. In the midst of releasing his first project “The Coronation”, he collaborated with many local Detroit rappers and producers such as  E Fav, Pig Pen, Foul Mouth, and a slew of other Detroit artist. Nolan would soon feature Semi on his Left Of Center /Fat Beats 2016 released LP titled “He(Art)” on a bonus record called “Enigma”.

Picking up steam in the Detroit rap scene, Semi assisted by Nolan The Ninja, would make another self released project titled “Park Orange”, a 9 track EP filled with boom bap style head banging beats and masterful rhymes entirely produced by Clear Soul Forces member  Ilajide. Semi and Ilajide, joined by features from E Fav, Nolan The Ninja and Layna Lavish, gained critical acclaim throughout the blog-sphere, and the EP was purchased and streamed from cities stretching  as far as Sao Paulo, Osaka and to the far corners of Auckland New Zealand.

Born Jael McCreary, the 90’s and early 2000’s guided his tastes for music, approach and style as a boy growing up in Detroit. He prides himself on sharp lyricism and style, and has always saw himself apart of Hip Hop culture since his first time abroad in the early 2000’s, when his family opened a clothing store in Qatar specializing in throw back jerseys and other sports and urban apparel named after Detroit’s most famous venue and store, “The Hip Hop Shop”.