Album Review: ANKHLEJOHN - As Above So Below 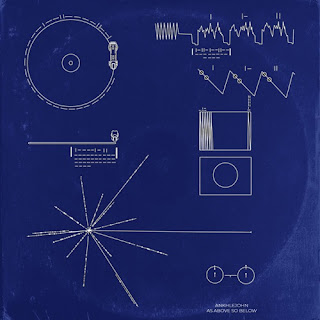 Right before the end of last year in 2020, the Lordy reppin' DC himself ANKHLEJOHN (pronounced uncle John) dropped As Above So Below on December 10th, just in time to make me re-consider my tops of 2020 list. Hence why it's now February 2021 when I'm getting this late review out. Let's jump right into it.
The soulfulness of the first two tracks City of God and Final Destination hit my damn soul. City of God is like being in a movie or some shit, looking up at an image/GIF of a singing woman in the star glittered night sky. Final Destination feels like I'm on the road with Lordy experiencing this wild ass ride of life via the Hip-Hop route.
Code Naming ft. Navy Blue is on the lo-fi boom bap tip that's just got me boppin my damn head.
Serving as light in the darkness kind of track, The Lightway highlights overcoming whether it be ANKHLEJOHN himself, black folk, the individual listener, or people in general. John is found giving praise to Elijah Muhammad for being the light he and the NOI were and still are for black people. I'm right with John when he said on this track "Believe in who you wanna believe in, as long as you believe in it."
All I gotta say about Harlem Nights is that the freaks come out at night.
Ain't nobody slouchin' on the mic on Look Beyond ft. Al. Divino and Da$H. The low/no bass or drums along with the soul sample on the beat is like watching ripple formed waves or calm sitting water, or some singing apparitions levitate into infinity. I can't help but want Boldy James featured on this track. Maybe a remix in the future?
The title pretty much says it all with Man on a Mission.
What I mainly get from Hi-Point Jammed is Ankhle saying "stand up original people" and to stand strongly and powerfully as a people but to remain strong on your own two feet as individuals.
Just the fact that two (if not THE two) of the hottest niggas in this underground shit are on the same track on Rick James ft. Fly Anakin makes this track bang.
2nd Coming is damn regal. I mean this shit is royalty (like the Gang Starr track). This is the God/Lordy's royal Hip-Hop decree.
With a beat so warm that it could warm up even the coldest and most dead winter streets, on Eazy Does It ft. WifiGawd and Pink Siifu, the lineup wrecks freakin shop. This was my first introduction to WifiGawd and I have to say that he oozes a southern like charisma (he's from DC) on the mic.
On the closing and title track As Above So Below ft. Wiki the album is going out on that hard, gritty, grimey, cold, boom bap vibe which is fitting even if this album isn't exactly on that tip as much as Lordy's previous projects. Wiki once again proves to be a more than reliable feature choice in the game.
Summary: My first review of an AnkhleJohn project comes when he drops arguably his best work. With no signs of slowing down whether it's COVID season or not, my anticipation for Lordy's next release is as high as his potential.
Rhymes = 3.75/5
Content = 3.75/5
Beats = 4/5
Overall = 3.75/5