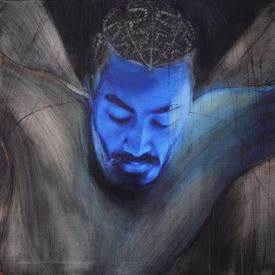 I was first introduced to Navy Blue when he featured on the song "The Mint" by Earl Sweatshirt off of his Some Rap Songs album in late 2018. Ever since then I've checked for Navy's music. In early 2020 Navy released his debut album Ada Irin and in December 2020 he released his 2nd album Song of Sage: Post Panic! and that will be the album I'm reviewing (tardily) today.
The intro track Dreams of a Distant Journey is surely dream-like and hazy. There's a melancholy to this track that's comforting. Navy speaks on having to grow up quicker than most and how he reconnects to himself and his spirit through dreaming and connecting with the Choctaw within.
Navy lists a plethora of issues black people in America are sick of hearing about and experiencing on Tired. I'm not even going to go into what they are because if you're black then you already know and even if you're not black, given what the societal climate in America has been since black people have been here and especially in 2020, I don't have to go into detail. Just the same problems we've been fighting for decades and centuries, so when Navy said "We need justice, it's just us. Praying to a God who don't hear us." I felt that shit.
The album takes a loss melancholy and more jazz-funk turn with the tempo on Post Panic. I like this change of pace early in the album. I'm not sure if I'm "supposed" to get this feeling from this song at this stage in the album but just given the change of pace I feel like it is a "post" panic feeling. Like a calming, accepting and clarity experience.
Up next it's time to take a trip down Memory Lane with Navy. I'm envisioning a younger Navy already stricken by pain and experience with his higher self, but when we get to the chorus and he talks about having to laugh on this hell-ridden path where you have to wear a mask, wash your hands or fall victim, pick a casket and lay in it, I feel like I'm on a trip down memory lane myself back to early 2020 right before the pandemic which seems so long ago.
Back to the melancholy on Certainty featuring Maxo There's a warm feeling from this track that's perfect for the current cold season, so warm that it's almost suffocating. Both MC's express how they're slaves to themselves and their ways, which is relatable.
And we're back to the jazz feeling on Poderoso featuring Billy Woods. The game being spit here is that life is what you make it, experience is what you learn from it, make out of it, take out of it and how you perceive and react to it.
Even without or at least very little presence of drum or bass, Deep Water Blue is still a head bopper. I mess with the soul sample too. Navy appears to be helping other people repair themselves because he was once where they are in terms of pretending he wasn't broken or not realizing just how broken he was.
Self Harm is not the way to go and is the next track up. Navy says self harm is just a way to cope. Whether you've committed self harm or not, you gotta feel this.
"1491" Navy speaks on missing his friends.
Breathe featuring Yasiin Bey (Mos Def) it is emphasized how things don't really change until the people who want change, change themselves.
I'm loving the cool but warm, soulfulness of Sea Bass.
Aunt Gerry's Fried Chicken feels like another trip down memory lane. Navy has gone from hard times of his mother not really being around, his brother being deep in the bottle, his Dad being gone, but these days he's flying.
We're Back to Basics next. This track is rather hypnotic.
Pressure Points features a beat with an instrument I can't exactly place but it just sounds like it's crying with dread which fits the narrative of Navy feeling pressure of current times and the effects of times he wasn't even around for.
Alignment is Navy finally feeling the alignment of his body, soul and spirit.
Moment Hung got me calmly boppin my head. It almost feels like a sermon in church due to the beat but the pain Navy expresses as well.
17 Enough features Zeroh who mixed & mastered the whole album and it's pretty fitting for Zeroh to be singing the way he is because it follows the sermon vibe of the last track.
The last track 224 is a perfect closer given the beat and subject matter. It sounds and feels like Navy saying bye for now with this album and he's in a place where he can say he loves it here, himself and others and how he lives for his ancestors.
It took time for this album to grow on me just like Some Rap Songs which I just love given how that's how I found Navy in the first place. It's a late review but I had to do it.
7.75-8/10 rating, and you can listen to the album below