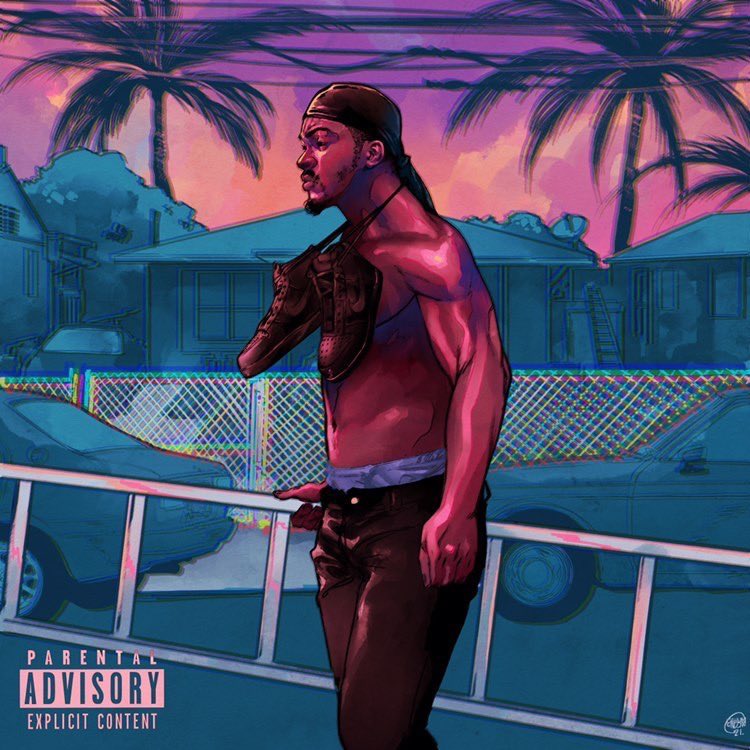 This extended play was released on February 19th this year. Sylvan LaCue released my favorite album of 2018 with Apologies in Advance, and Searching Sylvan is probably my favorite mixtape ever, so it goes without saying that I was pretty psyched for this project. About a year or two ago he sent me a track from this project that completely blew my socks off, so I have pretty much zero reason to assume that I won’t love this project. I think he’s trying to maintain a certain level of mystery behind this “Young Sylvan” series, so I’m not gonna give too much information, but I will say that we’re definitely gonna be hearing from Sylvan a lot this year. He’s one of my favorite rappers of all time, so I’m super excited. Enough dickin’ around. Let’s get into this shit. Every track is produced by Sylvan & Merlaku Ra.
There aren’t any tracks that I don’t like, so I’ll talk about the full project in the proper order of the track listing. The EP begins with Young Sylvan Back.This shit is fire. I love the hard-hitting production here, and Sylvan’s rapping like his flow is on steroids.

Life had a nigga trippin', I ain't know why, how
I gotta stay free out in these streets, dog, I don't like vows
Took over the lease on that bitch, now it's my house
Don't send me no contracts my nigga, shit is on flight now
Switch up on me, better be prepared to turn your lights out
Settle shit like grown men, not now, nigga, but right now
And I'm pullin' up dolo on your set, ain't no time outs
Face to face, no DMs, nigga, I don't like to type out

I love how aggressively he’s rapping here. This sounds a lot more like something from Searching Sylvan than his other more recent work. I feel like the beat itself on this track is pretty simplistic, but Sylvan’s actual rapping keeps things interesting. He murdered this shit. I love the hook too. That O-Dog line is fire. The song is dope as hell. The second song on this EP is entitled First 48. This is the one song I’d heard prior to the official release of the project, and it’s still a major highlight for me. I love the melodic delivery on the opening verse; it’s catchy as fuck. I guess Grandmaster Vic just helped with the background vocals, and I think he sounded really good. It’s pretty much impossible for me to not sing along with this first verse.

12 cracked down, him 'em with the vic
Young Sylvan, how you deal with all this shit
Fuck school, but I finished 'cause I'm lit
Dodged college debt, man I'm feelin' rich

About a third of the way into the song, the beat switches up and Sylvan’s flow and delivery get way more aggressive. This is my favorite verse on the project right here. He spazzed out here. His flow is crazy.

Fuck every rapper in this bitch
Y'all niggas is liars
I visited niggas and gave my love to the highest
All I saw was the egos of peasants doin' the heisman
Meanwhile I done won every honor through my assignments
Quietly put up numbers and let my thoroughness rise
If I had a dollar for every nigga I influenced
I'd probably drop this album, say fuck it, and then retire
This is not what my elders told would come to transpire

The violin on the outro sounds really great too. That was a nice touch. I really have no gripes with the song at all. I think it’s dope af. The following track is entitled Clam Chowda. I feel like this is probably one of the more accessible songs on the project, not that any of them are too left field for mainstream audiences. This one just feels even more accessible than the others. It’s only a minute and 49 seconds long, so there’s not that much to dig into. I do like the upbeat, horn-driven production, and Sylvan’s aggressive delivery sounds great over it. His flow was nice too. The melodic hook is pretty simplistic, but I think it serves its purpose well. This track isn’t really a highlight for me, but I definitely did enjoy it. It’s a good song. I think the following track, MJ, is better. I love the fast paced Trap production here. It’s the fastest song on the project. The opening verse from Sylvan is pretty nice, and I actually like the hook from Merlaku Ra. His flow on this hook is super simplistic, but the autotuned delivery sounds good. After the hook, the beat switches up after a little interlude, and then Sylvan spits one verse in which he says one of the most disgusting lines I’ve heard all year.

She be my rose, shoutout Aretha
Fuck her then suck juice up out her urethra

That is fucking nasty. I don’t… I mean… Do I need to explain why that line is so gross? Goddamn, Sylvan. Goddamn. Lmfao. Anyway, I do like the song overall. I wouldn’t say it blew me away, but I definitely enjoyed it. I think it’s dope. The closing track is entitled Backseat 2012, and it’s fire. I really love how simplistic the production is here. It’s pretty much all percussion, which is cool. It’s the kinda beat that wouldn’t really be that entertaining without a dope rapper spazzing over it, but that’s thankfully exactly what we got. Sylvan killed this shit. His breath control is crazy here.

Opa-locka before Obama
Nigga stretched hands outta four-four Hondas
Triangle where the dope flows proper
Mama said know your role, doors locked up
Keep a low pro' when the popos pop up
Snow cold even though the sun grows hotter

I like the second verse even more than the first one too. The hook isn’t really anything special to me, but it serves its purpose. The song is dope as hell to me.

This EP is really goddamn great. I’m really excited for the next entry in this series. I will say that the main appeal here is definitely the actual rapping. I generally wasn’t that impressed by the skeletal Trap beats here, but Sylvan is one of those rappers who can kill it over any type of production. Most of the songs here are pretty short too, so this EP really left me wanting more. I’m glad there’s more coming, but I just hope we don’t have to wait too long. I don’t know if it’s just me, but this project kinda felt like a throwback to the Searching Sylvan days in my opinion. I think it’s mainly because of the more Trap-influenced and aggressive production style here. None of these tracks are as smooth or mellow as what appeared on Apologies in Advance, which is cool. I’m glad every project of his that I’ve heard has been sonically consistent. So yeah, I’m loving this EP. Give it a listen and let me know how you feel about it. I think it’s really great.

"They Convicted Me Over Lunch Break": A Closer Look at the Case of Big Lurch

November 2002—Antron Singleton is sentenced to life in prison. He is accused of cannibalism and charged with murder and aggravated mayhem. Singleton puts his back against a cinder wall with no room to wiggle. He became forever pegged as a man-eating, drug infested, naked monster. Better known as Big Lurch, the Texas native was en route to a potentially fruitful, legitimate rap career. He worked with the likes of E-40, Too $hort, Lil Keke, and Mystikal, while also receiving cosigns from Death Row—not a resume to scoff at. For whatever reason he took accustom to the Bay Area and New Orleans scene. He had record deals under MCA and Black Market Records. Originally from East Dallas, Big Lurch is a southern man with no if's, and's or but's about it. His name is no coincidence either. He stands at 6 and half feet tall with lanky limbs, braided hair, and inconspicuous reading glasses depending on the time and the place. His pseudonym is said to be inspired by Lurch from The A