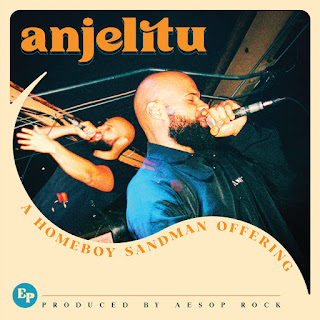 Underground Hiphop mainstay Homeboy Sandman has announced a new release today, produced entirely by Aesop Rock namely ‘Anjelitu’.
Homeboy Sandman said:
"I wrote half of these songs when my energy was either headed in the wrong direction or already there. I wrote the other half while my energy was moving in a direction I'm more excited about, that I find to be more enriching.
They're all still my songs though. My mother, and lots of my relatives, used to call me "Angelito." Little Angel.
The taijitu is the symbol for yin and yang. Opposites that make a whole. Given the dualistic/duelistic nature of the songs on the record, put it all together and what do you get, Anjelitu."
The project kicks off today with lead single ‘Go Hard’ about which he said:
"Go Hard in all I do otherwise what’s the point. This is one of my favourite beats I ever rapped over, Aes is the best for giving it to me.”
Go Hard is out now, plus pre order links for the album are here:
https://homeboysandman-mmg.bandcamp.com/album/anjelitu-2