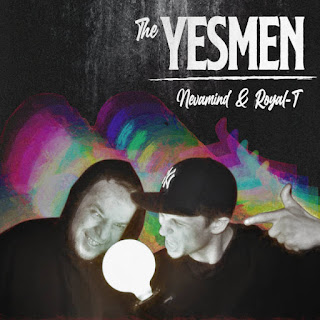 Nevamind & Royal-T (The Yesmen) release their fourth and final release with this self-titled album. Originally recorded in 2016 and finished just one week before Royal-T’s passing, the album was therapy for T and an opportunity to chill with his hip hop fam before his time was up. With debauched lyrics about sex, drugs, and the rap life, The Yesmen and guests flip through a variety of flows over Nevamind’s neck-snapping production. Aside from a current mix of the album, all ten songs remain as T would remember them, and they continue to hold up five years later.
The duo met in Thunder Bay, ON, in 2000, when chopper Royal-T competed in a rap battle where judge Nevamind—a rapper, producer, photographer and comedian—was so impressed he invited the battle rapper back to his Nevres home studio and subsequently impressed T with his own mic and production skills. The two quickly became like brothers, and would constantly “yes” each other, leading to their group name. They dropped their first album together, TBay Classics, in 2002, and followed up with NO in 2012, and the Return of Pee Wee EP in 2014. In between The Yesmen albums, Nev and T also released a number of solo albums and collabs with their fellow Deepcave fam. Nevamind & Royal-T’s The Yesmen drops April 16 on digital, CD and cassette from Hand’Solo Records.#RestInRoyalT
Hand’Solo Records
@handsolorecords
www.handsolorecords.com