[ALBUM] Speed on the Beat - The Sorest Loser 2: The Reign of the No-Fi King 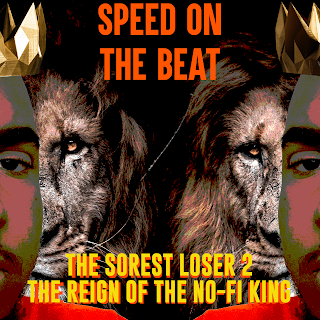 Baltimore artist Speed on the Beat has been ahead of the curve for years now. While certain artists look for fame or clout to push their career forward, SOTB’s prolific output mixed with his rooted yet experimental sound means there’s something for everyone. With over 15 projects under his belt and a number of series currently running including the “Baltimore Commercial Break” series, many are wondering what’s coming next from the Baltimore veteran. Just a few months after the release of “Diamonds Are Unbreakable 2” with Shokus Apollo, Speed on the Beat presents us with a sequel, 'The Sorest Loser 2.' Rooted in SOTB’s “no-fi/lo-fi” sound and leaning further into his pro-nerd lyrics and strong collaborations from long-time friends of SOTB, 'TSL2' provides a diverse album for newcomers and veteran listeners alike.

With “The Sorest Loser 2” Speed on the Beat picks up right where he left off, creating music with varied topics and sounds, but still comes together in a cohesive project. Despite running the independent lane with his prolific output, it needs to be stressed that Speed on The Beat cannot be stuffed or forced into one lane. The album is introduced through “Back at It (Reign of the No-Fi King)” which has SOTB rhyming over underground inspired production, however, Speed sets the listener up by never sticking to stereotypical tropes. This truly is the underlying theme of the entire album, it’s unpredictable but still flows together effortlessly. One minute you’ll hear Speed creating over lo-fi production, then down the line you’ll run into tracks like “Caviar Dreams 2” (a reference to his 4th release from 2020) where he’s on his braggadocio rhyming over a more trap-influenced beat. “It’s equal parts rejection of one concrete sound of hip-hop and a celebration of what makes me great in my own unique way,” Speed on the Beat explains. With features from long-time friends of Speed on the Beat like Carter Marie, True God, and Shokus Apollo, 'The Sorest Loser 2' is a varied and unique project that doesn’t play by the rules set by the industry. Instead, Speed on the Beat is paving the way for newcomers and showing everyone a different side of this art we call hip-hop.