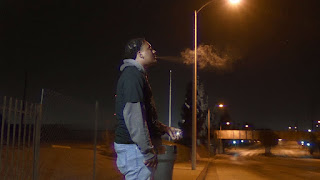 The audio single was released on April 30th 2021, and today the Chicago rapper Dyzzi from DivSel and Turkish producer Farazi drop the music video for their song "Vent". Video is directed by Castro of NewHighFilmz.

Dyzzi adds: "The song pretty much represents and explains why I’ve been distant from music. With everything going on in both the world and within my personal life, I’ve felt more lost than I’ve ever felt before. I started doing and thinking things I’ve never thought too much about before, and I’ve been extremely isolated with nobody to talk to hoping to somehow become inspired again to write. With me not being in contact with any of both my fellow artists and producers during this time, the beat pretty much approached/was offered to me at the perfect time. It sounded exactly how I felt inside so I knew where I wanted to go with it but I was finally able to write the song in one sitting once I picked up smoking, hence the line "smoking on this Gary Payton", and something in me finally clicked telling me "You need to let out your frustrations. Vent."."