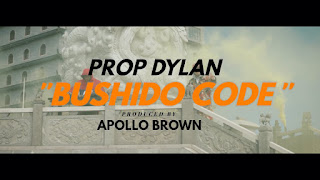 Prop Dylan is now releasing the music video to the 2nd single and title track called ’Bushido Code’ produced by Apollo Brown. The single bears same name as the album: Bushido Code: fanlink.to/bushidocode
A future piece of classic with the typical soulful sound of Prop Dylan. A mix between Nas and Ghostfaces tonality over a landscape shaping beat signed by Apollo Brown.
On May 12th Prop & Fashawn released the single ”Stuck” taken from the same forthcoming ’Bushido Code’ album. Stuck was also produced by Apollo Brown.
The album features Elzhi, Termanology, Fashawn & Cosmic from Looptroop Rockers.
It’s estimated to be released in November 2021 followed by a European tour.