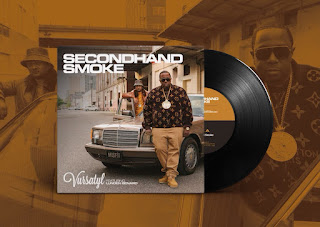 The legendary MC Vursatyl drops off the new single/music video "Secondhand Smoke" featuring his up and coming protégé Lunden Benard - now available on YouTube as well as Apple Music, Spotify, Tidal, and more!
Produced by Seattle's own Vitamin D, "Secondhand Smoke" is jazzy and funky reminiscent of Golden era Hip Hop, with Lunden Benard and Vursatyl both displaying high-level lyricism and elite story-telling abilities. Vitamin D, who recently scored Starz's ‘Power’ Theme Song, delivers the perfect soundscape for this equally gritty and smart single, while still keeping the vibe something you can ride to. Filmed in Atlanta, GA - Vursatyl and Lunden Benard step out fresh to death, from the fly rhyme schemes to the classic Mercedes-Benz, and rare Polo Ralph Lauren fits - it's obvious these two artists pay attention to the details and didn't miss any specifics on their latest release. First stepping into the Rap game as part of the iconic group Lifesavas, as well as the world-famous Quannam Projects, Vursatly is now taking time to shine the light on a new artist in Lunden Benard, and Bernard is taking full advantage of the opportunity with every verse.
Following up on their collaboration "I Don't Want You Anymore" Benard and Vursatyl once again combine for a fun and dope single that feels like a breath of fresh air in today's music climate. Available now for Pre-Order is the rare and collectible "Secondhand Smoke" 7" Clear Vinyl featuring the original single and bonus remixes as well. Guaranteed to sell out, be sure to order your copy of Secondhand Smoke on Vinyl to own a piece of Vursatyl history.
Read more on Vursatyl's historic career below and be sure to press play on the Official Music Video for "Secondhand Smoke" now available on YouTube!