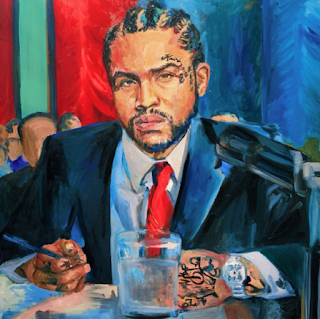 On the anniversary of Jimmy Hoffa’s death (7-30-82), Dave East & Harry Fraud bring Hoffa to the forefront once again. .

“My latest speeches sound like they was released by David East, verses hit hard” J.Cole quipped on The Off Season’s ‘applying.pressure” (Dave would also appear in the tracks corresponding video), but between running his own imprint, From The Dirt, and his burgeoning acting career, where he is currently filming season two of Hulu’s Wu-Tang: An American Saga (in which he portrays Method Man), there are no off-days for the Def Jam/Mass Appeal artist.

In mid-June of this year, Dave East joined forces with Westside Gunn for a special art show which would unveil the artwork for his then forthcoming project Hoffa.  The original painting was curated by Westside Gunn and his Buffalo Kids collective and unveiled during a live in-store at the Walden Galleria in Buffalo, NY.

Along with the release of their new project, Dave & Harry also released a new visual for “Uncle Ric,” which features Benny The Butcher.