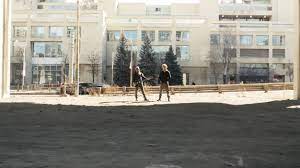 
Named for a small neighbourhood in Scarborough Toronto, Birchcliff is the musical documentation of the experiences of Jake Harding — a new dynamic musician on the scene.

Birchcliff’s newest single “Anxiety” offers a window into Harding’s mindset and benefits listeners a distinctive perspective on the artist’s hybridization of folk instrumentation and hip-hop lyricism.

The track opens with gentle fireside guitar and Harding’s lamentations on the modern environment and how isolated both the world and the individual are becoming. Themes such as mental health, wealth disparity, and climate change ring throughout the song's opening until heavy percussion and electric guitar slam into a triumphant dirge—“Anxiety/ Got me/ I ain’t free no, no/”—that lingers in the air after each chorus.

“I’m inspired by people I witness from all walks of life living in Toronto. It’s often human struggle that inspires me most – rich or poor, we all struggle with something. Pain manifests in many different forms, at varying degrees of intensity, but it’s something that most of us can relate to,” says Harding.

Anxiety’s introspective nature plays to the strengths of Harding’s experimentation with two genres, the rhythm and cadence leave the listener a sensation of a march towards answers, answers that may not be found.

“It took me until I was in my late twenties, with my own space, and a lot of life experience to pick up the guitar and put pen to paper. As soon as I did, the songs just poured out,” says Harding.

“Anxiety” is one of the upcoming tracks from Birchcliff’s debut EP, The City and the Mountain, the EP itself is a reflection of Harding’s genres of choice — hip hop (The City) and folk (The Mountain).
Song Credits
Songwriting: Jake Harding
Performed by: Jake Harding & Kenneth Kingston
Produced by: Logan Trearty
Mixed by: Clifton Broadridge
Mastered by:  Pete Lyman
Music and Social Links
Instagram
Facebook
YouTube
Spotify