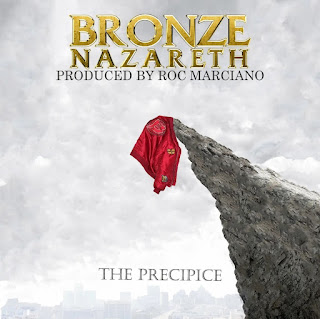 ”The Precipice” is the first single from Bronze Nazareth the upcoming release “Ekphrasis” produced entirely by Roc Marciano.

The track showcases Bronze's unique, yet classic style over the gritty and grimy beats that Roc Marciano is known for. Bronze and Roc Marciano's styles compliment each other very well, and this first single sets the tone for the entire record.

Taken off the upcoming album "Ekphrasis"

Ekphrasis (noun) ek·phra·sis\ˈek-frə-səs - “A literary description of or commentary on a visual work of art” which is exactly what the new album from Detroit, Michigan emcee and long time Wu-Tang collaborator Bronze Nazareth and New York's Roc Marciano is.

A work of art that you can visually see through Bronze's style of rhyming. The two have collaborated in the past, but this is their first full-length piece of work together. Bronze Nazareth's style of emceeing and Roc Marciano's production blend well with each other throughout the entire project. With assists coming from Skyzoo, Boldy James, Termanology, Fashawn, Killah Priest, Roc Marciano, Brizz Rawsteen and Lord Jessiah.

The album will be released worldwide via Black Day in July / Fat Beats Distribution on October 8th.