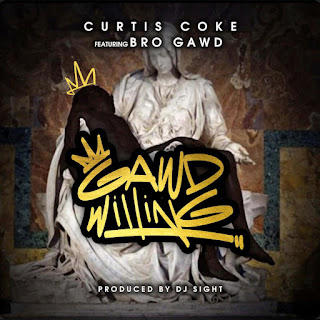 Rochester rhyme-vet, Curtis Coke returns with new visuals. “Gawd Willing” (video premiere via Paper Chase Dot Com) is a somberly laced gem (produced by DJ Sight) with motivational talk from Coke. Speaking on the joint he remarked “it’s the feeling of wanting and striving for it all, knowing it could all get fucked up but having enough faith to go full speed anyway.”
This message is brought home with a hook courtesy of BroGawd who Coke said “initially hooked up through my bro Year Of Jordan during feature on their record and video. I kept his talent in mind when I was working with DJ Sight on this joint."
Look for cameo from Kidd Called Quest (Young Black And Gifted) another frequent collaborator of Coke in the video as well. With a decade plus of recorded music to his belt, Curtis (who formerly went by the names Curt Laisi and L.I.) has had street classics bang out on radio in Rochester and Buffalo. He has also worked with such notable producers as Midnite (38 Spesh), DJ Sight and Eto as well as collaborating with such artists as Lady Luck, Bobby Valentino and 38 Spesh