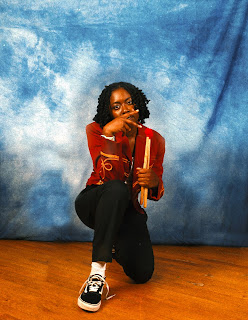 North Carolina-born neo-soul artist Cyanca has been making waves way ahead of her forthcoming sophomore EP Fast Times, which will follow up 2017’s The Isle of Queens and 2019’s I’m Staying Home. In her music, Cyanca aims to exemplify Blackness, soul, and to pay homage to her Southern roots as well as continuing to root for Black women. Growing up in Smithfield, North Carolina, Cyanca attended Johnson Chapel Baptist Church, where at a young age she often played drums, keys, and organ. Residing with her grandparents, the family lived off well water and didn’t have a dryer, so she learned to hang her clothes on the line, among many other survival skills. Cyanca studied music at UNC Greensboro, adding a formal education to her training in church as well as training from her dad while riding around in his Volkswagen Beetle listening to hip-hop like A Tribe Called Quest.

Since moving to Charlotte in 2016, the artist has continued to build on the success of her hit song “New Phone, Who Dis?” and the excellent I’m Staying Home single “Patti Mayonnaise.” The former is objectively her most popular hit song that put her on the national radar, and which currently has more than 1.6 million streams on Spotify. Cyanca has been covered with much adoration in Bitch, Queen City Nerve, and Teen Vogue.

Now living between Charlotte and Atlanta, Cyanca signed with label Infinite Companion in 2020, under which she’ll release her forthcoming Fast Times EP, which drops on September 10, 2021. Similar to her being influenced by Nickelodeon TV show Doug for 2019’s repeat-worthy “Patty Mayonnaise,” the new five-track Fast Times project has a throwback vibe that references films

Fast Times at Ridgemont High in the EP’s title, and Dirty Dancing with the first single. Of the “Dancing Dirty” single, Cyanca says:

“Prom in high school was not ideal. My school was so strict that you couldn’t dance a certain way or even dress a certain way. I wanted to create my ideal high school experience through music where individuals can express themselves without interference or regulation. No rules, just vibes."

The second single “PB&J (Jammy Jam)” is a tranquil, downtempo joint that’s perfect for any “Chill Hop”-style playlist. Cyanca says the track is like "when a group of friends link to partake in snuggling, movies, and munchies with the intention of spending the night listening to our faves. This is PB&J: Pajamas Booze & Jams"

Cyanca’s slightly raspy, warm, and inviting vocals glide over gorgeous, complex, at times futuristic production. While her sound is completely distinct, fans of soul singers like Ari Lennox, NAO, Jamila Woods, and Erykah Badu will love to devour the new artist’s new Fast Times, as well as her entire catalog, which consistently demonstrates songs of quality over quantity.