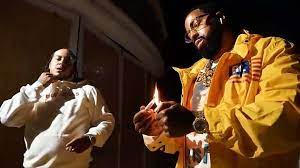 Flee Lord And Roc Marciano Are Feeling The "Breeze In A Porsche" In New Video
Flee Lord had a banner year in 2020, putting out an album every month. The dozen projects included offerings fully produced by big names like Pete Rock, Havoc, 38 Spesh, and DJ Shay (RIP), plus features from Ghostface Killah, Raekwon, and Conway The Machine.
However, in 2021 Flee decided to slow things down and focus on his Lord Mobb imprint, going so far as to purchase his own vinyl press. So, his first LP of the year "Delgado" only just recently dropped. This ain't just another Flee release though, "Delgado" is entirely produced by the father of the new underground Roc Marciano and features the year's most buzzing rappers, Ransom and Stove God Cooks.
Today, Flee and Roc are gracing fans with the visuals for album standout "Breeze In A Porsche." This Starz Coleman-directed video was recently filmed when Flee took his Lord Mobb crew out to LA for a sold out show.
Flee Lord socials
https://www.instagram.com/inf_mobb_flee
https://twitter.com/inf_mobb_flee
https://www.facebook.com/therealfleelord
Roc Marciano socials
https://www.instagram.com/rocmarci
https://twitter.com/rocmarci
https://www.facebook.com/RocMarci