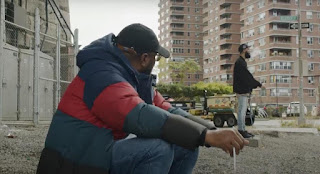 “The Season” a new video from the emcee & producer combo of MidaZ The Beast & SHARP. Shot by Steltz the normally Orlando, Florida based duo are posted up in NYC surrounded by that unmistakable grimy backdrop of graph-strewn tunnels, elevated train tracks and imposing monolithic buildings.
“The Season” is taken from the newly released EP #LIVENIGGARAP which MidaZ said was “inspired by the energy and feeling of the Nas record. We were creating from the space of guys who came from street battles and after show cyphers and being outside in an era where it wasn’t always safe.”
Another video from the project “Pardon” was previously released (link below).Watch official video for “Pardon” Here
Order #LIVENIGGARAP Here