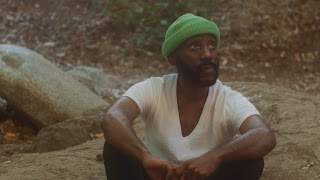 lead single from LA based Hip-Hop artist River Nelson entitled New View, which dropped today ahead of new studio album 'Like The Sun Didn't Sink' set for release on Friday 29th October.
The song is about River gaining new perspectives on life and how he's now viewing life because of that outlook.

But the song, produced by Alto, is also about anyone who’s recognized they’ve gained a new view on things because of what they’ve learned or experienced.

“This song is a celebration of someone now seeing the world through a brand new lens,” said River.

River and Alto shot the video for the song high in the mountains at the beautiful Sunset Ridge Saddle Loop in Altadena, California, and the cliff shots go perfectly with the “New View” concept.

River Nelson began his recording career when he was signed to Arista Records by label executive Joy Bailey while Clive Davis was still at the helm. He also hooked up with the New York rappers the Boogiemonsters and was featured on the group’s classic debut Riders of The Storm: The Underwater Album.

River worked with legendary UK producer Lewis Parker and the two created the critically praised The Rise & Fall of River Nelson in 2010 and their follow up The Shape of The Sky in 2013.
Having previously worked with producers such as Lewis Parker, Matt Sibley and Bias, the new album is an introduction to River Nelson and LA based producer AltoBeats who produced the full album. The pair will continue working on projects in the future. Lead single New View is a "celebration of someone now seeing the world through a brand new lens”
River Nelson
Instagram: https://www.instagram.com/rivernelsonmc/
Twitter: www.twitter.com/rivnel
Facebook: https://www.facebook.com/river.nelson
Bandcamp: https://rivernelson.bandcamp.com/
Alotbeats
https://www.altobeats.com/
Instagram: https://www.instagram.com/altobeats/
For more information please contact mike@steamingkettlepr.com