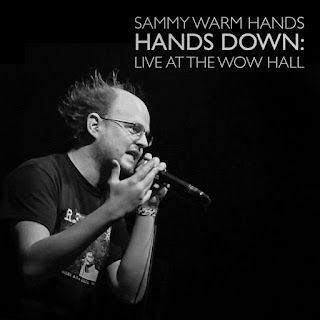 Eugene, OR emcee/podcast host /author Sammy Warm Hands has dropped a live video for the track “Lipstick” this morning. Filmed in 2018 while sharing the stage with his friends Sage Francis and B.Dolan, this hometown performance will be part of the forthcoming DVD / CD release, Hands Down: Live At The Wow Hall (dropping 9/17 via Take 92 Music, Crushkill Recordings and Strange Famous Records).
The show in question features first-time performances of many songs from Sammy’s Figures Of Speech (2018) album as well as fan-favorites from Bears Repeating (2014) and Famous Last Words (2015). Boasting three angles of filming, post-production work from Taylor Morden (The Last Blockbuster) and multi-track audio mixed by Sammy himself Hands Down: Live At The Wow Hall is a quality hip-hop time capsule of the artist.This album follows on the heels of the release of Sammy Warm Hands second book, How To Ruin Your LIfe: The Daily Grind Of A DIY Tour. The book is a no-flinching tell-all of the decade from Sammy Warm Hands' I Quit My Job For This tour and the 16 subsequent tours, topping 100,000 miles on the road. Available via print and audio-book formats (via the link below).Most recently Sammy Warm Hands dropped an official and socially-distant video for the track “Redefine The Flow Pt 2” featuring Casual (Hiero)Watch official video for “Redefine The Flow Pt. 2” Here“Redefine The Flow Pt. 2” appears on Sammy Warm Hands' Figures Of Speech double-album which is available in limited CD format and digital via Bandcamp (and streaming platforms as well). In addition to Casual, the project features an amazing array of emcees including Gift Of Gab, Supastition, Blueprint, Illogic and Carnage The Executioner and was mostly self-produced.Pre-order Hands Down: Live At The Wow Hall: http://take92.com/More info: https://www.instagram.com/sammywarmhands