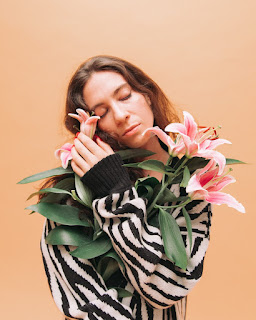 ”After the deaths of my grandmother and brother and the recurring visits of an unwelcome voyeur, insomnia arrived and took over my life.
It was a relentless, nightly occurrence, leaving me awake for days at a time. After so many sleepless nights, three strange things began to happen. First, I began to fear being alone in my bed. Second, my days became messy and unscheduled as I tried to plan around the brief moments that sleep would find me.
And finally, the potent and intense yearning I felt to put my loss and internal turmoil into words magnified into tunnel vision, and haunted my constant waking state. Nice and Slow was the first song I wrote during this time, and it poured out of me like a prayer for sleep” - Abby Diamond

Produced by close friend Max Vehuni of slenderbodies, chronicles a time of intense growth and evolution into a more enlightened state for Diamond.