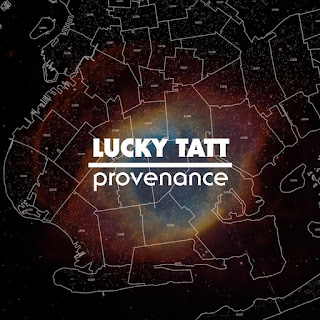 Fort Green, Brooklyn Emcee Lucky Tatt and NYC based producer Endemic Emerald have dropped a new single this morning. “Answer To A Question” is street conscious hip-hop about elevation of the community with orchestral flair.
With the release of this single comes news of a full LP from this pairing of Tatt and Endemic. Provenance will drop via No Cure Records (with distribution from Fat Beats) on 9/24 in LP and CD editions and is available for pre-order at link below.According to the dictionary the word provenance is defined as: the beginning of something's existence; something's origin. Asked why he chose to name as such Lucky Tatt said “I feel like this project is the start of something great and the word displays what I’m trying to achieve.” Features on the album include Planet Asia and Swedish vocalist Josy.Lucky Tatt has had a nice come-up in the past few years earning co-signs and collabos with such notables as Lil Fame (M.O.P) and Royal Flush. Originally hailing from the UK, Endemic Emerald’s love of east-coast hip-hop prompted a move to NYC where he has released a notable number of banging tracks featuring the likes of Sean Price, Ill Bill, Tragedy Khadafi, Ruste Juxx, Darkim Be Allah, Revenge Of The Truence and many more.Pre-order Provenance LP/CD:
https://nocurerecords.bandcamp.com/album/provenancehttps://www.fatbeats.com/products/lucky-tatt-provenance-lp
Follow Lucky Tatt: https://twitter.com/luckytattFollow Endemic Emerald: https://twitter.com/EndemicEmerald