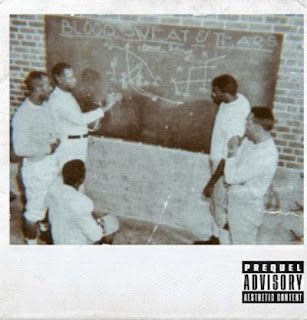 South Side Chicago beat-scion Onaje Jordan has returned with new heat this morning! “Play Ya Role” is that excessively brolic dark-jazz tinged boom-bap that us 90’s heads fiend for. Augmented by nimble scratch-work by Belgium’s DJ Grazzhoppa (Jay Royale, Jamil Honesty), the cross-country tag-team of emcee talent Substance 810 (Port Huron, MI), Kingdom Kome (Miami, FL) and Killy Shoot (Worcester, MA) go off in full.
This single is the first leak from Jordan’s forthcoming maxi-single The Alpha In The Room. To drop on 9/10 the four-track offering (to be released in limited cassette format) was inspired by the late 90’s run of Game Recordings (who released underground touchstones such as Bad Meets Evil’s debut Maxi-single). Expect appearances by many of Jordan’s Hometeam compatriots (track listing and appearances to be announced shortly).In addition to his own releases, Onaje Jordan has produced tracks featuring the likes of Benny The Butcher, Dave East, Kool Keith, Prince Po, Asun Eastwood, Daniel Son, Jamal Gasol, Recognize Ali and Bugzy Nino.More info: https://www.instagram.com/onajejordanbeats/
Onaje Jordan · Play Ya Role