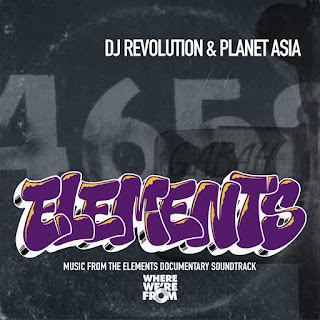 West Coast Vets DJ Revolution & Planet Asia have unveiled a new single this morning titled “Elements.” Named for the legendary weekly hip-hop event that helped facilitate the careers of many underground notables, Asia is in his full storytelling mode (aided by production and turntable work from Revolution). A first-hand look at Club Elements in its heyday, he reveals that a lot of your favorite emcees almost lost their careers in those weekly emcee battles. He also recalls that even though he was signed to Interscope Records at the time he would haunt the cyphers that opened up there weekly hungry to spit.
This single is taken from the soundtrack to the documentary film, Where We’re From: Rise of L.A. Underground Hip Hop which is available via all digital platforms.The soundtrack was fully created by DJ Revolution who produced over sixty instrumentals for this film. As the on-air DJ for the iconic Wake Up Show With Sway & Tech through the 90’s Revolution himself witnessed a lot of spill-over the Elements emcee battles, which would continue in-studio as scene favorites would stop by and spit on the show.Available via home theatres everywhere, the film is a first-hand look at the fertile but often overlooked scene that produced legendary West Coast figures in hip-hop that made impacts globally. Assembled lovingly by Club Elements co-founders and producers DJ Bonds and DJ Breeze, the film features footage and interviews from such artists as The Freestyle Fellowship, Jurassic 5, Planet Asia, Talib Kweli, Souls Of Mischief, The Beat Junkies and Dilated Peoples.
DJ Revolution · Elements