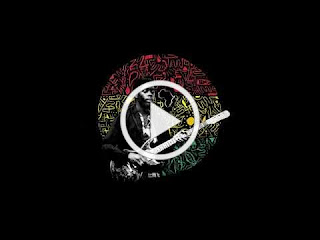 Theon Cross is expanding the sonic possibilities of tuba playing, and is at the forefront of the thriving London jazz scene. The gifted musician, composer and core member of Mercury Prize-nominated outfit Sons Of Kemet just shared “Forward Progression II,” the latest track from his upcoming album Intra-I (meaning “Within Self”). “‘Forward Progression II’ is a song in honour of my dad who passed away in 2020,” notes Theon. “It is a continuation of a concept of self empowerment and progress that he was able to leave to me through his music and which I discovered fully when I came across some unreleased recordings with his band from the 80s. It is also a means for me to pay homage to reggae and Jamaican sound system culture which form such a crucial part of the music I (and others) are making today.”
Due October 29th on New Soil / Marathon, Intra-I is an uplifting celebration of Black music, synthesizing the diversity of his musical art and experience to deliver an essential message to a world gripped by tribulation. “Forward Progression II” follows the release of the album’s previous singles “The Spiral” featuring Afronaut Zu and AhnanséT and “We Go Again.”
Across ten sonically divergent and bass-rich tracks, Intra-I explores themes of self-reliance, origins, identity and more. An exploratory and upful celebration of Afro-Diaspora Music, the album features songs that examine self-development, the importance of history and heritage and the strength in adversity shown by the first generations of post-war Caribbean immigrants to the UK. In addition to being entirely made from sounds taken from the tuba, it is his first music to feature guest vocalists adding a whole other dimension to his music: the album features Remi Graves, Shumba Maasai, Consensus and Oren Marshall, as well as Afronaut Zu and Ahnansé on “The Spiral.”
Theon Cross is an award-winning tuba player and composer who not only redefines what can be done with his instrument but also transcends traditional genre conventions with his heady brew of low end theory combined with strains of jazz, dub, hip-hop, soca, grime, and other sounds from the Afro-Caribbean diaspora. In 2019, he released his acclaimed debut solo album, Fyah, and has collaborated with Little Simz, Stormzy, Moses Boyd, Nubya Garcia, Kano and others.
An incredible live performer who's constantly looking to push boundaries, Cross participated in SXSW Online earlier this year by playing both a live set from Abbey Road Studios and, using motion capture technology, as a 3D digital avatar in a VR showcase. His sets were highlighted by The New York Times as one of the “15 of the Best Acts” @ SXSW 2021, noting: “a virtuosic set by the tuba player Theon Cross… merged wah-wah funk with Caribbean carnival rhythms as Cross hopped between holding down the bass lines and joining the band’s brassy melodic crossfire.Cross will also embark on an extensive UK & Europe tour this year in support of the album. He’s also confirmed a U.S. performance at the Big Ears Festival in March 2022 -- look for additional 2022 North American dates soon.
FOLLOW THEON CROSS
Instagram * Facebook * Twitter * Spotify * Apple Music * SoundCloud