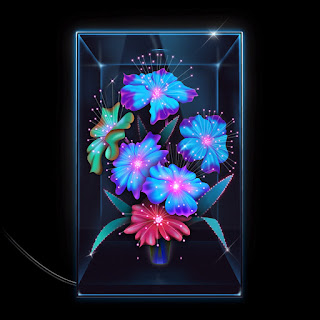 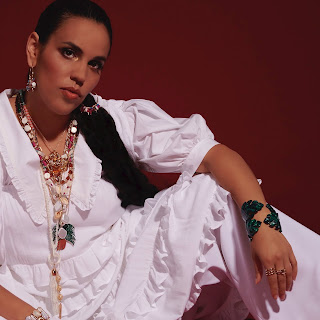 Just a little over a month after the release of ‘Working All The Time’, Xenia Rubinos gives another taste of her forthcoming album Una Rosa with the single ‘Sacude’- an intense, electrified and life-giving track that demonstrates the artist’s versatility and fearlessness.

‘Everytime I would sit down to improvise or write, I would just end up singing along to rumba songs instead,’ Xenia says. ‘Sacude’ was the song that cut through the silence, the first she’d written in a long time and technically the first she wrote for Una Rosa. ‘Sacude’ was a kind of mantra for her, what she would say to herself to shake off the funk she was in. Beginning with a steady clave and sweetly-harmonized a cappella, the song quickly escalates into a heavy, electrified, stuttering backbeat that gives the song an ominous overtone. ‘It’s definitely not a rumba, but it’s MY rumba,’ she says of the song.

A defiant-yet reverent abstraction of and tribute to the genre, the song is pure Xenia, all while uplifted by the influences of idols like Rita Indiana- ‘’Sacude’ is my ‘El Juidero’- it is my reimagining or retelling of rhythms and melodies I have heard all my life that I carry inside me’. The track begins with her singing to ‘Nancy’, who is ‘Negative Nancy’- a character that Xenia describes as ‘Debbie Downer’s evil sexy cousin’. The song continues on to attempt to get her out of her head ‘time to let it go’, the song repeats. Musically, Xenia was heavily influenced by Los Muñequitos de Matanzas, an acclaimed 1950s Cuban Rumba ensemble. In the dynamics of the song, she also dips into a dream she’s always had of being a sonero (leader of a salsa band) like the legend Willie Colon- the simple-yet-piercing chorus Sacude, SacudeY Dios Que Me Ayude, is ‘answered’ the last time around with ‘el diablo está detrás de la puerta’ of which Xenia says ‘I sang that last hook thinking about how [Willie Colon] or I might do it if I was el sonero.’ The last line of the song, Paloma dame la mano/Que quiero subir/subir hasta el cielo, is a play on a song Xenia used to hear sung at Puerto Rican Christmas parrandas when she was a kid. The song, which is carried by an old school hip hop beat, is a danceable confrontation of mortality- one that urges you to get out of your head and dance.

‘Sacude’ is the fifth single off of Xenia Rubinos’ forthcoming album Una Rosa which is due out October 15 via Anti- Records. The record comes five years after her critically acclaimed 2016 release Black Terry Cat which the New Yorker called ‘rhythmically fierce, vocally generous music that slips through the net of any known genre.’ Una Rosa is a cinematic obra, an imagined night time space where you’re transported through the lives of various characters, all of whom are sonically painted in each track. The record is two-sided- the ‘RED’ A side, featuring tracks that are hot, aggressive, in-your-face fiery drama, and the ‘BLUE’ B side, which presents a more introspective yet expansive mood.

Sonically, the album is somewhat of a departure from her earlier work- rather than striving for pitch-perfect vocals and tight live instrumentation, she cut most of the vocals in a single take, only tinkering with them after the fact. It’s an album centered around a multi-layered audiovisual story and the characters it contains. A true expansion of what the world knows to be Xenia’s palette, it features some of the most complex and cinematic production that she’s done to date. Emotional, vulnerable, and spontaneous, Una Rosa is a journey that keeps the listener constantly anticipating the next turn.