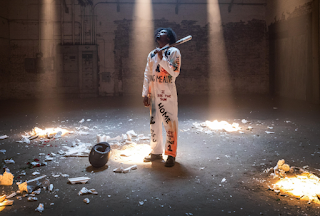 Meet ToBy! After releasing his EP The Outside last year, ToBy is now gearing up to release his first full-length album L'Esprit, which will be released on October 15th.
Blending elements of modern rap music and indie rock, L'Esprit follows a narrative and a character that is loosely based on ToBy himself and is his most personal work to date. The album deals with heavy topics such as depression, anxiety, grief, lost romance, and self-doubt, all while presenting catchy and memorable tracks that will get stuck in one's head with ease.
L'Esprit, which translates to The Spirit, is also an ode to ToBy's late grandma who passed away from cancer in 2019. ToBy was extremely close to his grandma, as she helped raise him and always supported his musical journey when others in ToBy's life did not (ToBy's parents were immigrants from Haiti and did not understand why anyone would want to be a rapper for a living.ToBy's grandma had to talk to them to get them to understand his passion). After receiving news of her cancer diagnosis in 2019, ToBy decided that he needed this record to pay tribute to the woman who helped him so much over the years. You can hear her voice on the record as a narrative guide, which was taken from a six minute convo ToBy recorded with her shortly before her passing.
Press release from 2020 with more info on ToBy: https://mailchi.mp/reybee/toby-livestreams
Instagram: https://www.instagram.com/itstobyseason/?hl=en
TikTok: https://www.tiktok.com/@itstobyseason?lang=en
Facebook: https://www.facebook.com/ItsToBySeason/
Twitter: https://twitter.com/itstobyseason
What ToBy's hopes people take away from L'Esprit, is his own words: "I believe in unity through specificity; by sharing our unique nuanced specific experiences we stand to become much closer to one another because we are not as different as we want to believe. The more specific we can get with our lives and our stories, the more it will resonate with a community because all of our lives are pretty specific... I hope people take away that they are not super alone in this world. I hope that by hearing my story and hearing me bare out my soul, as this is the most personal music I have ever made and I have never injected this much of my real life in my music before, people take away that the enormity of life is so grand and so vast and so much that the most we can do is experience it to its fullest; all the good, all the bad, and all the in-between."