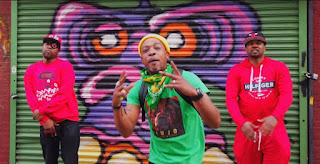 Big Almighty (the combination of emcee Raf Almighty and producer BigBob) have dropped new visuals. “Bullseye” features hard-body lyrical assist from allies Ruste Juxx and Skanks The Rap Martyr.
This is the first leak from the forthcoming album Once Upon A Time In Baltimore to be released via Elite Sound International and is the sequel to 537 Dolphin Street released earlier this year.Vinyl and CD versions are available for pre-order Here