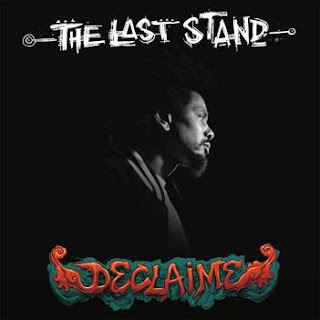 Oxnard rapper and singer/songwriter Declaime unveils The Last Stand. Initially receiving exposure through appearances on releases by tha Alkaholiks and Lootpack during the 1990s, and creating a massive amount of music with producer Madlib, over many years. With countless works releasing throughout the decade, 2021 has been a monumental year for Declaime. With the release of In the Beginning Vol. 1 which includes the early works of Declaime & Madlib. Now the release of The Last Stand, which houses legendary features, such as Latoiya Williams, Joseph “lovedragon” Liemburg, Juan Lobo, Braxton Cook, Ayun Bassa, and others. This is a record that you will have on repeat!

Not only heavy-hitting tracks left and right, but some great visuals to support all the beautiful artistry. Make sure to check out God’s Grace directed by mark4ord of Oxnard, as well as Forgotten Roads where Declaime is masterfully displaying his showmanship, while also catering to the weebs with his anime gear guru attire featured throughout.

Declaime is here to stay with powerful music. Not only has Declaime's discography been leveling up, but so has his label, SomeOthaShip Connect. A label that only speaks light but carries some heavy-hitting artists! SomeOthaShip Connect just released recent projects from Bread of Kaliwild--“Breath of Fresh Air” and Hiero--“Soil." There are also rumored upcoming releases by artist Moog Zilla “WestCoast Stone” and many more.

Declaime's The Last Stand is released in partnership with Fatbeats, Arawax Records and Believe Distribution. !