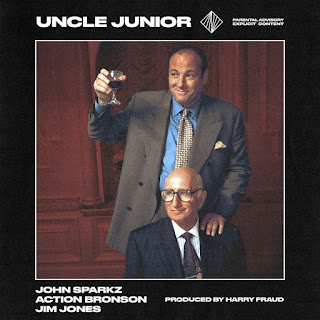 “Uncle Junior” featuring Action Bronson and Jim Jones and produced by Harry Fraud, is the brainchild of John Sparkz.  Sparkz, the long-time engineer of Harry Fraud, has recorded, mixed and/or mastered music by French Montana, Benny The Butcher, Jim Jones, Action Bronson, Curren$y and many others has spent thousands of hours listening, recording and fine-tuning some of your favorite songs.

So when Sparkz decided it was time to use his experience and relationships to curate/create a project of his own, he tapped some of rap’s finest for “Uncle Junior,” which was exclusively premiered by Ebro/Beats 1/Apple Music.

Having mixed Action Bronson’s White Bronco album, and Jim Jones & Harry Fraud’s The Fraud Department knew that if he was able to get El Capo and Bam BamBaklava together on a track produced by La Musica De Harry Fraud; he would have had an instant classic.  Mission Accomplished!