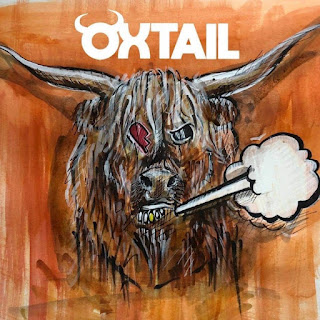 A new track entitled “Friends” has dropped today featuring the pairing of Jamal Gasol and Deuce Ellis.With this track comes the announcement of the October 8th release of their collaborative project entitled Oxtail. Though the release is over a week away the duo has already breezed through New England and New York playing several shows where they debuted some of the new material.Speaking on “Friends” (which features live instrumentation and hook courtesy of Ellis) Gasol says “it’s about how I’d rather be a friend than a lover with relationships. Whenever you’re getting down with someone, casual or not, feelings get caught and that makes things messy. The instruments and hook brought out another side of me than what I usually show on my music. It’s definitely a party vibe.”
Oxtaill is fully produced by Ellis (who also appears on four of the tracks). Gasol, who would travel from his home-base of Niagara Falls, NY to Brooklyn to record, named it Oxtail because “It’s the one dish I always eat whenever I come down to the city. Expensive taste at a good price every trip.”Jamal Gasol has been a whirlwind of activity pre and during quarantine. This includes recent releases For Bern (Produced by Infitada Beats), The Black Ball EP (Produced by Blessed Girl) and the 100 Blunts In Venice release (Produced by DirtyDiggs). In addition he has released a new freestyle every few weeks (for his Stir The Pot series) all Produced by The Standouts. On the branding tip Gasol’s Piff Music Empire has been building including air freshner, Piff Papers, slippers, jerseys and more.Emcee/producer/musician Deuce Ellis wears many hats. In addition to his lyrical poetry, he plays guitar, keys and other instruments. He actually owns the same KORG Triton once owned by the RZA (gifted to him by Popa Wu). His most recent release was ACID, which featured appearances by Homeboy Sandman, Che Noir, Sauce Heist and Napoleon The Legend. In addition to music, his boundless creativity also expands to writing comic-books and designing sneakers.Instagram:https://www.instagram.com/whoisjamalgasol/https://www.instagram.com/deuceellis