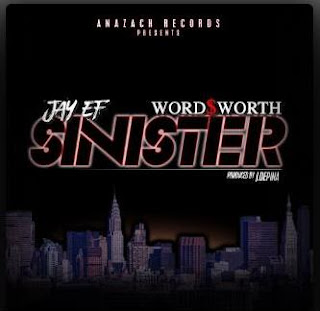 “Sinister” a new track pairing all-star lyricist Wordsworth with decorated turntablist Jay-Ef. Ominously produced by J Depina the lyrics and scratches reflect a litany of real-world issues that affect us today. Speaking on the track Words revealed “Sinister touches on what’s going on in the world today. The decisions people are making are based on any means necessary without caring how it affects others or themselves.“
With this track premiere is the announcement of a seven-song project between Words and Jay to be titled Undivided Attention. Dropping on 10/19 the project features production from J Depina, Kellz with The Heat and Donell Smokes as well as an appearance from Masta Ace. Jay and Words have history dating back to the turning of the millennium when Jay-Ef released the debut EP from the duo of Punchline And Wordsworth on his Mona Records label. Jay also served as tour DJ for said duo while touring through seventeen different countries.Jay-Ef history in the game goes back to the 1980’s in Newburgh, NY where he would open shows up for touring artists including Run DMC and other legendary figures. Through his label Mona Records, he brought over Planet Asia to NY for the first time and set him up a studio session with Talib Kweli for the underground single “Don’t Let Up.” In the following years, he fell back from the recording game but has kept busy as a member of Rob Swift’s Brolic Army of turntablists for live routines. He has also flexed his hosting muscles as co-host of the award-winning Leschea Show.It was Leschea’s notable spouse Masta Ace who suggested Jay-Ef work off some energy during the pandemic by recording and connected him with J Depina (who produced the entire Believe It Or NotEP).Wordsworth of course is a touchstone of the underground hip-hop movement, his work in the 90’s securing him a permanent spot in lyricist top ten’s. His freestyle abilities and charisma was the inspiration for the Lyricist Lounge TV Show on MTV (which he starred in), he also was tapped by both A Tribe Called Quest and Blackstar (the duo of Mos Def & Talib Kweli) for appearance on their prime 90’s release. After touring the world Wordsworth surprised many by deciding to make teaching his priority, eventually earning a Masters of Music Business from University of Miami and now shares hip-hop game to his students in Florida (though still making time to record and make appearances as a member of eMC with Masta Ace and Stricklin as well as an animated appearance on Netflix’s Peabody And Sherman). Recently he released a book entitled What Words Are Worth Volume 1: New Beginning which was ranked on Amazon’s Top 10 new releases in poetry.