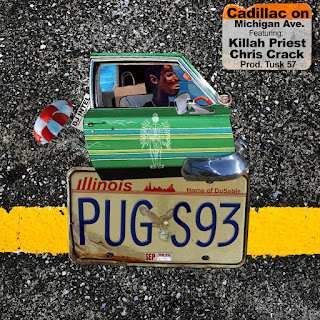 Cadillac on Michigan Ave. feat. Killah Priest and Chris Crack, the third single from the forthcoming Test Drive LP by Chicago’s Pugs Atomz, is a gritty banger that conjures images of flying down Chicago city streets late at night with the crew in the ride. This single is the latest in a series of collaborations between Pugs Atomz and Killah Priest over Tusk57 production work. Wu-Tang and Killah Priest fans will be thrilled with Priest’s verse who is at the top of his game. Chicago’s Chris Crack rounds out the collab with his signature sound that has made him one of the city’s rising stars. To complete the Chicago connection, DJ Intel lays down some skillful scratching at the end of the cut.

The forthcoming Test Drive album by Pugs Atomz dropping October 13th, 2021 is the culmination of a year-long collaboration with LA-based multi-instrumentalist producer Tusk57 and includes features from monster MCees like Killah Priest, Rockie Fresh, and Chris Crack. The album’s stand out sound is rooted in Chicago’s formidable underground where Pugs Atomz and Tusk57 first connected, but it reflects their global travel and omnivorous music influences. The album is designed for end-to-end listening and the vinyl will become a sought after collectible. Don’t sleep on it