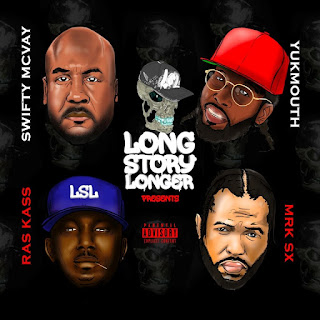 An executive-producer and A&R from Detroit, Lamont “LB” Askew’s vision is to make a Long Story Longer.  After getting his start as manager for D-12’s Swify McVay, he pivoted to production, which has always been his niche, and evolved into also working with The Luniz’s Yukmouth and Ras Kass and formed the production company Long Story Longer.

On 10-22-21, the fruits of that endeavor will arrive with the collaborative group effort Long Story Longer (named after the production company).  The group consists of members Ras Kass, Yukmouth, Swifty McVay and MRK SX (who has previously worked with Killer Mike, Royce 5’9,” KXNG Crooked, Nappy Roots and whose production work has also been featured as background on the hit FX series Atlanta).