Peace OK-Tho/Hip-Hop community. In today's review, we're focusing our eyes on Magic, the newest (15th) studio album from one of/if not THE best emcee to ever touch the mic, Nas. This album is in collaboration with producer Hit-Boy, who produced Nas' last two album King's Disease, and King's Disease II.
The intro track, Speechless sets the tone for the album. Not so much setting the tone as in how the album will progress sonically, but how Nas himself will sound so polished throughout the project. Nas delivers a slight variety of flows and cadence here while spitting about how life happens at a rate that's so hard to keep up with that one is left speechless.
Meet Joe Black is where you'll find Nas in his zone and feeling himself, as he should honestly. He knows he's a great, we know it, he's earned it. I'm liking this beat. There's a certain grit to it that appeals to me. Everything that I've said here, it all applies to 40-16 Building as well. 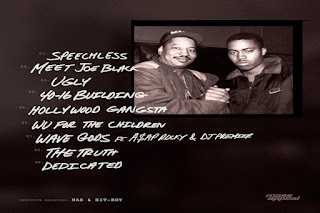 Nasir speaks on the ugly he sees and has seen on Ugly, and he does it over a beat that is far from ugly. It's a rather warm beat. Nas touches on all types of ugly you find out here from death, violence, jealousy, etc. This track is a favorite of mine.
It was a welcomed surprise to see Nas - an OG from the 90's - bring in one of the younger cats from the 2010's and fellow New Yorker A$AP Rocky in on Wave Gods. Hearing these two on the same track to drop glimpses into their lifestyles and references to Hip-Hop culture was special. Preemo had a hand in the production of this track alongside Hit-Boy.
The final track Dedicated serves as a place for Nas to look back at his career in retrospect and how he's dedicated his life to it, and also a look as to why he's stayed dedicated. From what I gather via the lyrics/subject matter, Nas seems to have stayed dedicated due to his upbringing in the ghetto, his awareness of his own status in ghettoes across the country and to black Americans in general, and how not much inside ghettoes has changed, and what has changed is not/never was desirable.
I must say, this is my favorite project from Nas since he started dropping consistently again back in 2018. He's as secure as ever, picking better beats, sounding better on the beats, and just proving that even after 30+ years in the game, he's still better than most out in the current generation and also showcasing as to why he's the GOAT (to me).
Rhymes = 3.75/5, Beats = 4/5, Content = 3.75/5, Overall = 3.75/5
Stream Magic below