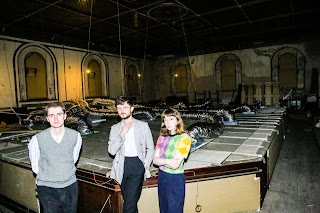 After winning significant plaudits and airplay for the art-funk experimentation of "Take The Hit" and their debut "Eternal Returns", Regressive Left return with their latest track "Cream Militia". Premiered today by Matt Wilkinson on his Beats 1 show, it's another new-wave revelation and further stand-out single from a group that have kept up a remarkable level of consistency and ambition across these early releases.
With a bassline that nods to the electronic music innovator Delia Derbyshire, pitch-shifting guitar hooks and synthetic agogo, ‘Cream Militia’ is a daring and dizzying cut of dance-rock in the vein of LCD Soundsystem or !!!.
A lockdown project formed at the end of 2020, Regressive Left wear their politics on their sleeve, and this translates into their DIY music ethos: as with earlier releases, "Cream Militia" was self-produced and self-recorded by the band in an outhouse near Stevenage but this time the trio brought engineer and friend David Mountain (Famous, Jerskin Fendrix) on board to co-mix.With influences ranging from the cyclical rhythms of EBM to the creative freedom and expression of the London Jazz Scene, the band have been compared to everything from avant-pop heavyweights Talking Heads and Devo to modern art-rockers Squid and EBM outfit Scalping. The band joined ATC Live’s roster earlier this year, and with festival slots at End Of The Road and Wild Paths already announced, and a debut headline show at The Windmill in October, Regressive Left are primed to make an explosive entry into the live scene in 2021.
31 / 07 – Exchange, Bristol29 / 08 – Bedford Esquires02 / 09 – End of The Road Festival04 / 09 – Manchester Psych Fest18 / 09 – Voodoo Daddy's, Norwich25 / 09 – Dot To Dot Festival01 / 10 – Windmill Brixton (headline show)16 / 10 – Wild Paths Festival
Simon Tyrie - vocals & electronicsWill Crosby - guitarGeorgia Hardy - drums