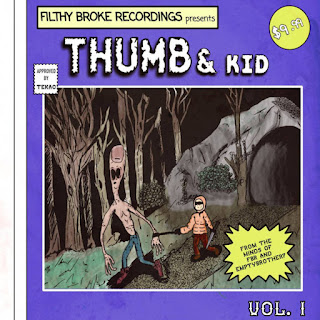 Thumb & Kid is the first in a series of upcoming instrumental tapes by emptybrother7 and FBR. Each tape features a blend of genres as emptybrother7 and FBR are both multi instrumentalists, producers, and engineers. What started off as a few tracks and an idea for a beat tape, FBR kept sending emptybrother7 sounds to flip into oblivion and then arrange. 3 weeks later they had several dozen tracks and not just a beat tape, but an experience. With cover art that will continue the journey on upcoming tapes Thumb & Kid is created for those who like to deep listen from front to back.
This ten-track, almost 20-minute collab project contains a diversity of vibrations created and captured by both of these musical talents. It flows in a manner that showcases an attention to detail that they both share not just as individual musicians, but as a joined force in chemistry. Thumb & Kid 1 serves to me as just a warm-up for even more enjoyable experiences in the coming volumes.
Caddy Trap sounds like existing in an ethereal space.
Soul in LoFi gives off the vibe of being somewhere chillin, watching the sunset while boppin your head and blazin.
There's no silence to be found on In Search of Silence. The first 4-5 seconds had me thinking that an old Odd Future direction was being taken but instead we got a wavy, atmospheric track.
I like the change of pace in 7ds. It's an almost primal beat. It darkens the mood of the project and sets the tone for the next track.
Pivot takes me to another world. The clear and full expression of the instrumentation is soothing.
We're being taken back to the primal route as well as a bit galactic on Sword Swallower.
Rain Shower is a return to a sound similar to what we found in the first 3 tracks of the album but even more somber, while Hold Up is also a return to that same vibe without as much somberness but still enough to make these two tracks feel cohesive.
I got the stankface on to Different Levels. Sheesh this is a BOP. I could hear Aesop Rock on this for sure.
Riders Of The Night (ft. Ji Sharp of Road Waves) is the standout track for sure. The guitar, the drums, the sequences, and other instruments being utilized make this feel like the perfect closer track. A bit of a cinematic vibe is given off here.
Stream: Thumb & Kid 1. Also be sure to follow both emptybrother7 & MJC on Twitter. The streaming and follow links can be found below.
Emptybrother7 twitter - https://twitter.com/EmptyBrother7 FBR twitter - https://twitter.com/FilthyBrokeRex