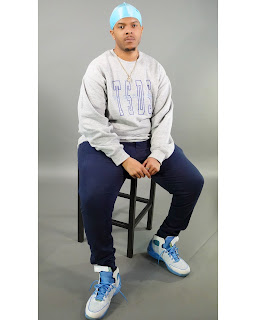 Portland artist Snoogz drops off the Official Music Video for his new single "Buckle Down." Available on YouTube, Apple Music, Spotify, and more - Snoogz comes through with a hustler's anthem on his new single, breaking down his grind and motivating listeners along the way. With one watch you can see Snoogz is really outside and a prominent figure in his neighborhood, adding rap to his collections of many talents. Snoogz gives an honest and real look at life coming out of North Portland on "Buckle Down." Mixing his heavy influence of West Coast rap with his love for East Coast styles as well, Snoogz gives us heavy bars but in smooth, laid-back delivery. Not only a music artist, but Snoogz has also started an entire clothing line based on his tagline "This Shit Don't Stop" which appears through "Buckle Down." Another highlight of Snoogz's work ethic and determination is his weight loss journey. Starting out at around 360 lbs, Snoogz has dropped down to 220 lbs, dropping down from a 4XL to an XL. Having worked with some of Portland's young greats such as Vinnie Dewayne, Northside Tego, Nick Bezas, and more Snoogz is aligning himself as another force to be reckoned with coming out of Portland, Oregon.
Watch the Official Music Video for "Buckle Down" available on YouTube and be stream to stream on Apple Music, Spotify, Tidal, and more as well.
Stream “BUCKLE DOWN”
Spotify: https://open.spotify.com/album/7ahSU8huA8OZD5RnkNeT4e?referral=labelaffiliate&utm_source=1011lj4YaAm4&utm_medium=Indie_Distrokid&utm_campaign=labelaffiliate
Apple Music: https://music.apple.com/us/album/buckle-down-single/1616482905
Read more on Snoogz and follow on Social Media below:
Social Media

Soundcloud: https://soundcloud.com/user-781191107/buckle-down/s-AHVwlBVKt0e?utm_source=clipboard&utm_medium=text&utm_campaign=social_sharing
Bio
Pacific Northwest native, Snoogz, is an upcoming rapper representing North Portland, Oregon. The talented and well-rounded new artist stepped into the rap game by delivering a mixture of unique sounds similar to the West Coast & East Coast styles of music and genres. The tagline “This Shit Don’t Stop” comes from his lifestyle clothing brand TSDS, which started as a clothing brand that branched off to different avenues such as music. Heavily influenced by the Snoop Dogg & Dr. Dre West Coast era and Jay-Z and 50 Cent East Coast era, Snoogz is entering the rap scene with a wavy sound that has allowed him to illustrate his vision, journey, and dedication through his music. He has worked with notable North Portland-based artists such as Vinnie Dewayne, Northside Tego & Nick Bezas.