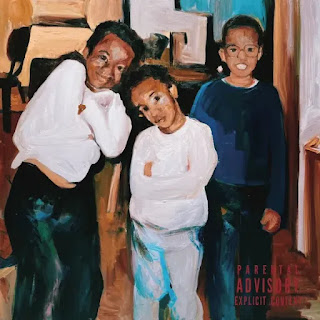 Tana Talk 3 was one of my five favorite albums of 2018 so I was coming into TT4 expecting to enjoy it as well. Did I? I'll just let the review answer that question. 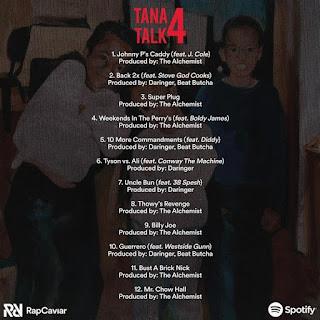 It felt like Benny (finally) was acknowledging and accepting the stripes he's earned on the intro track Johnny P's Caddy (ft. J. Cole).
Back 2x (feat. Stove God Cooks) was laced by Daringer x Beat Butcha. The beat has a way of sounding like old Benny material, but more polished. As far as the men on the mic go, they returned the favor to the producers as did the work they put in which they touch on their rhymes about how they got it back.
It's a continuation of the old Benny sound on Super Plug except this time it's Alchemist on prod. Benny speaks on going all in on the game he was in before the rap game because he had no choice after stepping in it.
Alchemist is back on Weekends In The Perry's (ft. Boldy James) except you'd think this was left off Alfredo by him and Gibbs. For the beat to sound so laid back and like something you reflect to is fitting because that's what you find both emcees doing here. Benny feels like he's Westside's best investment, and Boldy talks about the disconnect he feels, betrayal, the stress on his brain and regret he lives with as a result of being a big shot in the game(s).
10 More Commandments (feat. Diddy) - Obviously following up on BIG's shit, for Diddy to be here as well is cool. There was never any worry of Benny of all emcees ruining BIG's shit on some corny shit.
Tyson vs. Ali (ft. Conway the Machine) - Benny touched on the versus shit we sometimes find other heads of the game bickering about and how he questions just how important it is on top of finding it funny in a corny way. Con came in congratulating Benny for coming so far because he watched it all while also coming up himself. I honestly thought this was going to be a more up-tempo track with a theme of both emcees going at it. 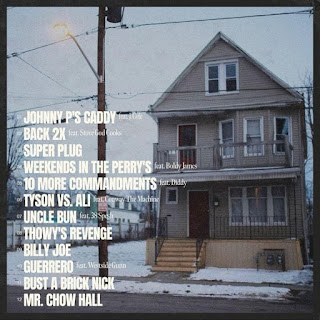 Daringer really got one here on Uncle Bun (ft. 38 Spesh). As a UGK head I was all for it when I saw that title. Much respect. Both emcees remember coming up in streets vividly.
Guerrero (ft. Westside Gunn) - This that slow, creepin through the hood at night type shit that Daringer x Beat Butcha got going on here. Hall x Nash did it once again.
I like how Benny decided to close with a dark beat touched by Al the Chemist on Mr. Chow Hall. From modesty, connections, advice, work, Benny keeps it all a buck between it all and keeps it moving.
It ain't TT3 but TT4 is nothing to scoff at.
Stream TT4 below.