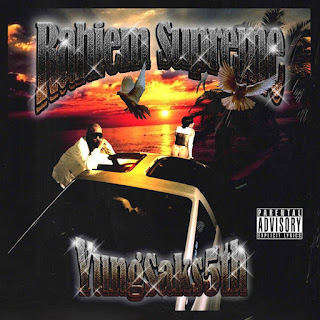 I've been a consistent listener of Rahiem Supreme ever since he dropped The 9 Diagrams in 2021, but this is my first time reviewing one of his efforts and I couldn't be happier to. The god enlisted another god, WifiGawd, to produce his latest album YUNG $AKS 5TH. Let's dive right in. You will find a link to listen to and buy the album at the end of this review, at the bottom of the page. 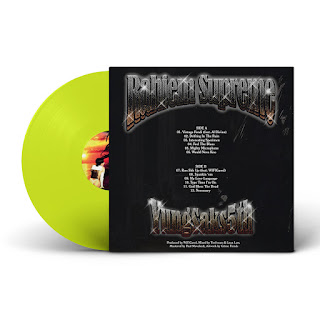 It starts off lavish on the intro track Vintage Fendi ft. Al Divino. Al is the only feature on the album. Al invites the loves to come have the time of their lives, while Rahiem comes in halfway through the tracks duration, flowing with more energy than the beat itself per usual but make no mistake, he doesn't sound off beat at all and sounds right at home.
The second track is titled Drifting In The Rain but the beat reminds me of a sunny day, basking in it. Rahiem spits rhymes of coming up in a stressful environment, some of his relatives experiencing the same upbringing, and how sometimes he wishes it was all a dream. He also expresses receiving wisdom from his grandfather.
Interesting Specimen has an abstract laced beat and Rahiem's lyrics match that, and for the track to be what it's titled, everything about this track is fitting. Rahiem talks about being aware of his foreignness/weirdness and embraces it. I must say that ever since I heard the first flow in 2021, I too knew that Rahiem was different.
Feel The Blues is up next and again, the title fits the beat and Rahiem's subject matter. This track is a tale of finding some sort of relief in the company of a love that Rahiem met while out one night as they both experienced the blues together.
I really found myself bobbin my head on Mighty Microphone. It's like the god is spitting these rhymes from a back alley on a cloudy day, that's what the beat has me envisioning and it kind of makes me want a music to go with this track.
I said that it felt Rahiem was spitting on a cloudy day on the previous track. Well, the beat on Would Neva Kno sounds like coming outside as the sun pierces through the clouds after the rain ceases, shining on the wet concrete. Rahiem flows about being stabbed in the back, coming up poor, how he paranoia haunts him and he keeps to himself to maintain himself. 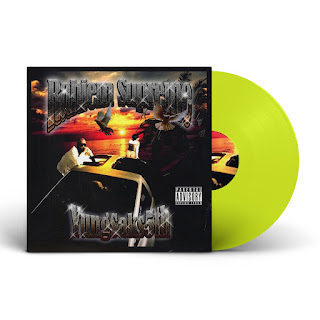 Run Shh Up is a banger on the low. I say on the low because this is not exactly what I expect from Rahiem and it's not a "typical" banger in terms of heavy bass or sequences. Rahiem sounds right at home on it regardless, showcasing versatility. It is one of those "Let's get it" songs about keeping it moving, killing it. Spankin 'Em follows on a similar tip.
Love Language - Straight game is all I can say.
Type Time I'm On. Another banger. There's a funkish groove about it that I feel is really catered to or created  by Rahiem's fluidity.
God Bless The Dead might be the heaviest hitting banger on the album, and really cements the 2nd half of the album (to me at least) as the banger half. Rahiem rhymes here about being a dead man walking while also remembering his lost loved ones, like his nephew especially.
The outro track Necessary is where Rahiem talks about how all of his needs and wants are just that. Short, sweet and straight to the point.
I'm honored to finally notch a Rahiem Supreme effort on my review belt. It was going to happen eventually and I'm glad that it's YUNG $AKS 5TH. S/O to Rahiem of course for his vintage unique flow, his abstract as well as funny and "yeah, what about it?" attitude delivery in his lyrics. I can't leave out WifiGawd for showcasing his own versatility on the production side, matching Rahiem's versatility/vice versa. Definitely check this album out if you haven't, and let it be known how you feel about the album if you have heard it.
Peace.