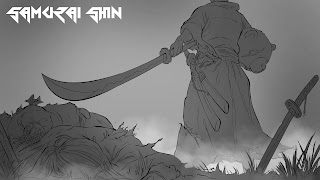 For those not in the know, Samurai Shin is an independent comic series. A series you should check I might add. I reviewed the series' soundtrack "The Prelude EP" earlier this month which you can read here Now I've had the pleasure of sitting down with the series' main writer Mikel Miles, and Illustrator/Character Artist Ivan Earl Aguilar.

Jab: The first question is for the two of you guys, Mr. Miles & Mr. Aguilar. How did you guys come together to create Samurai Shin?

Mikel Miles: Allow me to answer first, Ivan. Well, Ivan and I spoke to each other on Facebook about doing a comic book series. After that, we started sharing ideas and then boom, we created a Comic Book. For the rest of the team, we found Sukma Agustriyana, Fahmi Fauzi and Harley Dela Cruz on 'Devinart.' We all discussed the idea, and that is how we became a team.


Jab: How do you feel about how Hip-Hop and comics/manga/anime, and art, in general, goes hand-in-hand to make quality, good vibe driven entertainment?

Ivan Earl Aguilar: Well, it was bound to happen. A lot of Hip Hop artists/musician out there are big fans of the Anime/ Manga, and some of their works show the influence. Hip Hop is about attitude and empowering people of any color or race. It can be violent sometimes, but for the rest of the time, it's subliminal. The fusion of these two genres has created a unique and entertaining art.

Mikel Miles: I agree with Ivan on this. He took the words out of my mouth, hahaha. Hip Hop is a compelling genre in music and for us to mix art and music with it, is a creative thing we are doing for the culture.

Jab: An obvious question and you might give an obvious answer, but did Samurai Champloo influence the creation of Samurai Shin? In addition, did any other anime/manga/comics, cartoons, etc. have an impact on the production?

Ivan Earl Aguilar: Yes, people have made a lot of comparison to our comics with Samurai Champloo and Afro Samurai, and we did get a lot of inspiration from those two. We can't deny the similarities but we are starting to get ourselves deeper into this massive world of Samurai Shin, and we are starting to take routes that would slowly help us get our mark. How should I say this, further or different from those comparisons? We take inspirations from a lot of sources, but we know we have something extraordinary and unique to offer to the world. In time, if people help and support us, then, we can give them something that they can relate to and something that matters not only to the Hip Hop/Manga culture but to those, who love stories about life and hardships and overcoming it.

Mikel Miles: Agreed, a shout out to the other guys, who are working on this project, Sukma Agustriyana, Harley Dela Cruz & Fhami Fauzi. These guys are amazing artists, and they always work hard to deliver excellent results. I forgot to mention another name working on the project, our editor, Lavender Khan.

Jab: What kind of space are you all in mentally, and what kind of setting do you need around you when you're all trying to create the Shin issues?


Mikel Miles:  I start with setting the mood for writing and getting ideas onto paper. While working, I want to be somewhere alone to concentrate more, with some music playing in the background. I am good with ideas, so they pop into my head one after another. That is why; I have to scribble them on paper before I forget them. I, sometimes, discuss online with my team, brainstorming on the ideas and trying to figure out what feels right for the story. I like to think of these characters as real people like, they are somehow writing themselves.

Ivan Earl Aguilar: When it comes to the storyline, it is Mikel most of the times, but we both share ideas. But, I feel that Mikel has more input to the story then I Do. I drew his ideas in the first issue. It is a great experience working with him so far.

Jab: What are some of your favorite current and all-time manga/anime?


Ivan Earl Aguilar: Studio Ghibli Animes are so in-depth and profound that I feel moved. They touch a lot of important issues about the world and humanity, but, I have to say, my most favorite Anime would be the 1980's Akira. Can you believe that it was made during that time? The quality of the art and writing is just way ahead its time. I am amazed by how the story is still quite relevant today.

Mikel Miles: Me, I got into anime in the 1990s watching Dragon Ball Z and Pokemon. Then, I stop watching it, but in the early 2000s, I got into Digimon, Beyblade, Naruto, Samurai Champloo and Afro Samurai. I'm currently watching Attack On Titan, Mannnnn!!! Did you all watch Season 2 of Attack On Titan? That shit was crazy!! My Hero Ademica, Buruto and Dragon Ball Super as of now are my favorites.

Mikel Miles: We just want to keep going and making these stories relevant for Samurai Shin. We believe it has so much to offer, and hopefully, it would get it's own Anime Series. That would be a dream come true.
Interview Main Featured
Reactions: