Fresh off an international tour and the release of their second commercial project, Spring Cleaning II, Sweatshop & Owl Green are back and nicer than ever on their most recent video single, "Those Guys.' The San Francisco based duo has carved out a niche for themselves by combining old-school inspired lyrical hip-hop with vibey beats and chilled out flows, and "Those Guys" finds both emcees bringing their best to the table. Plus. the pair have never looked quite so striking on camera. 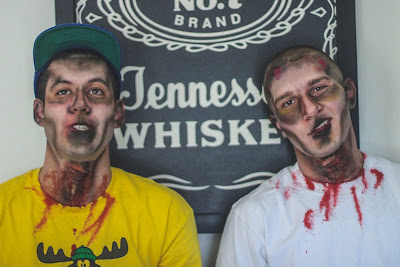 On the visual front, "Those Guys" represents a big step up for Sweatshop & Owl Green, which is saying something for a duo whose music videos have long been a strong suite in an eclectic artistic arsenal. Will Rushton Films, who made a name for himself by developing the video content of some of TeamBackPack's biggest names, comes correct as always behind the lens. But the San Francisco Bay Area based filmmaker had a whole lot to work with on the "Those Guys," thanks to some gorgeous strategic set changes and the powerfully eye-catching make-up work of artist HayleyyJay.

Amazing article written about a music vid I had the pleasure of collaborating on. Some of the most passionate, driven, fiery artists I know. https://t.co/yNbusMrQTd
— hayleyyjay (@hayleyyjay) October 4, 2017

Their first video single for Spring Cleaning II, "Roger Clemons," featured a catchy chorus and some straight forward rap bars from both Sweatshop & Owl Green. But there's nothing ordinary about "Those Guys," and that's starkly apparent from the moment the camera's start rolling. Close your eyes for a moment and step away from those hypnotizing visuals though, and there's a ton here musically that'll keep listeners coming back.

Owl kicks off the track with his characteristic swagger, deftly crafting a bevy of melodic layers over multiple flow changes so effortlessly that it's easy to miss how much masterful nuance is really at play here. Halfway through the video, dialogue comes back into play, as the boys contemplate the virtues of smoking joints versus getting their errands done, but as soon as the beat drops back in it's business as usual. Sweatshop handles the second half of the track skillfully, loading up on the quotable lyrics and old-school inspired word play to match the grimy production switch. Yes, "Those Guys" sure as hell know how to make a stand-out music video, but don't ever forget how well Sweatshop & Owl Green can rap their pants off.

If this is your first time catching up with Sweatshop & Owl Green, you've tuned in at the right moment. The duo are about to embark on a West Coast tour run with the Palmer Squares, and will be coming soon to a town in Oregon, Washington, or California, bringing their signature sound and infectious style to the stage. Plus, they've got videos prepared for all of the remaining songs from their Spring Cleaning II project (steaming below) so make sure to tune in!