Domo Genesis - Aren't U Glad You're U? [Mixtape] 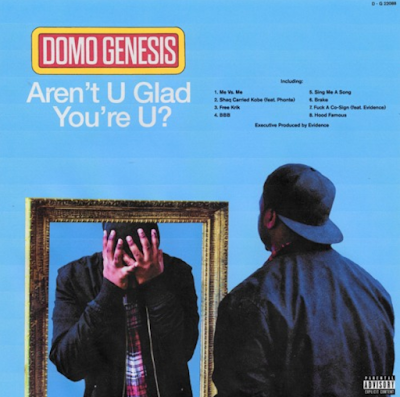 We recently covered what seems to be the single for this mixtape, if any, "Shaq Carried Kobe." Now, after a full listen, which took all of 20 minutes, it's easy to see that the single was true to the rest of the project. It's smooth, to the point, hazy, and open. The production, executively from Evidence, sounds more like it was pressed on vinyl than digitally. Domo is as sharp and witty as ever, opening nearly all 8 of the tracks with a cold punchline, and following with nothing but the same. Those lines that take a couple of seconds to register- that make you give that stank-face- seem to be Doms bread and butter throughout his career, and are well woven through the project. Between Aren't U Glad You're U? and The Red Corolla Tape, it feels like Doms might be gearing up for something big soon. If not, that's perfectly fine. These quick tapes are by no means hold-me-overs, they do fine as stand alones.

Shouts out to Domo and Evidence. Stream the project below, and check out some of its nicest bars.


"First time that I smoked it was to Hunger For More..."

"Watch me stuff your memoirs inside a cigar..."