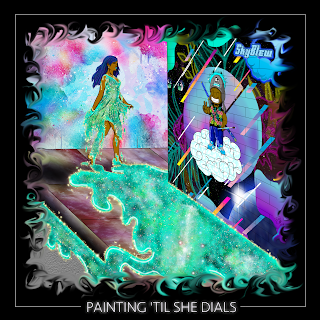 Not one week after releasing his joint album with producers A June & J Beat (Dreams of Autumn Kismet), Mario Farrow, also known as the emcee SkyBlew, dropped his twenty-second, I repeat, twenty-second quality album of genuine wholesome rhyme verses over blissful music on June 17, 2018. Painting 'Til She Dials (or PTSD) as it's titled, came five days after Dreams but the breadth of the project reveals what must have taken weeks if not months or perhaps years of inspiration, hard work and care.

As one of SkyBlew's official "solo" albums, production on it comes from a variety of music-makers including Sleeping Awake and Mag.Lo as well as his past collaborators SublimeCloud and Scottie Royal. Prepare your earbuds to transmit fine jazz, cool pop and comfy conscious messages straight to your brain's pleasure centers and take a chill break from the heat this summer by Painting 'Til She Dials.